Review: The Church From Every Tribe And Tongue 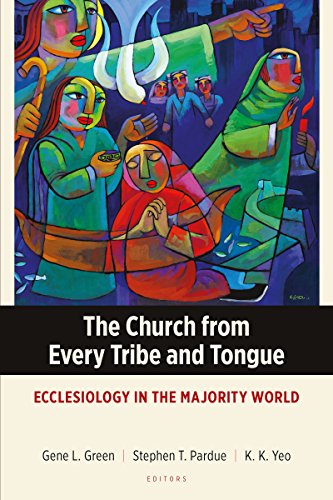 It is no surprise that the locus of the Christian Church is moving outward, from the West to beyond. The missional impulse of recent movements has expanded the meaning of the Church and made John the Seer’s vision increasingly clearer, “a great multitude that no one could count, from every nation, tribe, people and language, standing before the throne and before the Lamb” (Revelation 7:9). In light of the coming of global Christianity, the Western church has become more pressed to establish a global theology. Langham Global Library’s growing Majority World Theology series has provided exposure to Christian thinkers in the majority world on various doctrines. In its most recent addition, The Church from Every Tribe and Tongue: Ecclesiology in the Majority World (2018), a variety of global voices investigate the doctrine of the Church, offering insights into how non-Western lenses on the Church can shape Western theology and practice.

Nine respected theologians and biblical scholars from Latin America, Africa, Asia, the Middle East, and North America describe ecclesiological issues in their contexts. The book, a collection of papers presented at the Evangelical Theological Society and Institute for Biblical Research, opens with an introduction by Veli-Matti Kärkkäinen, author of the celebrated primer An Introduction to Ecclesiology (IVP Academic, 2002) and a leading voice in ecclesiology. He establishes the biblical foundations of ecclesiology and traces the Church’s mission and expansion into the majority world, setting the scene for the various topics in the coming essays.

The first part of this book is written by theologians from around the majority world. Ruth Padilla DeBorst, a Latina theologian, analyzes the issues in the Latin American church, particularly surrounding the role of the Church and imperial powers. Her poetic essay describes how the church community can engage in the harsh realities of life. Next, Wonsuk Ma, a Korean missiologist, examines the changing tides of Asian Christianity, using two South Korean churches as a case study for how Asia is forming unique theological identities. Finally, Stephanie Lowery establishes an African ecclesiology, describing the Church as a community of learners (or “apprentices,” as she calls them) who embark together on the mission of God.

Recognizing the unnecessary divide between biblical studies and practical theology, the second section of this book is written by biblical scholars who seek to apply the principles of Scripture to contemporary issues in ecclesiology. Carlos Sosa Siliezar, a Guatemalan New Testament scholar, uses the Gospel of John to make a case for churches as local communities with a global awareness. Xiaxia Xue offers a Chinese perspective on Paul’s letters, reading Pauline ecclesiology in light of recent Chinese church movements. Peter Nyende makes a biblical case for an African ecclesiology rooted in the book of Hebrews, portraying the Church as the great temple of Zion with Christ as its high priest. Finally, Munther Isaac, a Palestinian Christian living in occupied Bethlehem, writes in the midst of a tense geopolitical conflict to articulate a Palestinian theology of the Holy Land, calling it the “Fifth Gospel,” which reveals the mission of Christ to the world.

The Church from Every Tribe and Tongue is a fascinating, probing exploration into the global nature of the Church. The essays provide a diverse and interesting sampling of perspectives and ecclesiologies, opening windows into their worlds and showing how the Christian experience manifests itself in the majority world. They are interesting and highly readable, rich in thought and diversity. While the book brings together a variety of ideas, it is delightful to see how they remain relevant to universal, ecumenical Christianity, even carrying implications for Western Christianity. With its vast representation and scholarly insights, it is quite possible for this to become an authoritative volume in the growing field of global theology. Indeed, this text proves that the Christian Church is much bigger than one part of the world—and must be considered in a respective scope.


© 2018 Leitourgia All rights reserved.
A complimentary review copy was provided in exchange for an honest review.

Popular posts from this blog

August 31, 2019
Some recent evangelical trends have insisted that the Son is subordinate to the Father. It is in response to such complementarian theologians that the contributors to Trinity Without Hierarchy: Reclaiming Nicene Orthodoxy in Evangelical Theology (Kregel Academic, 2019) write. Edited by Mike Bird and Scott Harrower, sixteen respected theologians from around the world have come together to rescue the doctrine of the Trinity and reclaim the Nicene position, that all persons of the Trinity are co-eternal and co-equal.

The first essays introduce the doctrine of the Trinity from a New Testament standpoint, followed by a set of essays that trace Nicene Trinitarianism through church history, from Athanasius to the Reformers to Pannenberg. Although written with varying levels of difficulty—from introductory surveys to advanced theological treatments—each essay is short and digestible. The implications of the doctrine of the Trinity meet the challenges of modern evangelicalism, particularly su…
Post a Comment
Read more

April 03, 2019
Most preachers burn out. So claims celebrated homiletician and preaching professor David Ward. Ward contends that, while preaching is a life-giving activity, most practices of it lead to exhaustion and life waste. In his new book, Practicing the Preaching Life (Abingdon, 2019), Ward sets out to paint a practical theology of preaching that spiritually forms preachers and brings renewal, not only to preachers, but to their listeners as well.

Ward, as a student in the New Homiletic, draws heavily on Augustine and Aristotle, who view preaching as a means to embed virtues within the preacher. He begins by establishing a correct theology of preaching: what makes good preaching "good"? What are the offices of the preacher? From there, he moves toward practical applications, including weekly sermon preparation routines and sermon forms. Ward's approach to preaching practice, however, diverges from traditional books that either offer homiletical theory with little application, o…
Post a Comment
Read more

Review: The Significance of Singleness

April 29, 2019
In this much-needed book, theologian Christian Hitchcock develops a vision for singleness and the church. Recent evangelical tendencies, argues Hitchcock, view singleness as a problem rather than an asset, a curse rather than a blessing. Drawing from her own experiences as a single Christian woman, Hitchcock skillfully combines personal reflection, historical evidence, and biblical-theological support to claim that single persons are themselves a theologically significant group.

Hitchcock begins by tackling the problem of singleness head-on. She describes the perception of the “problem of singleness,” from pop culture to the Marriage Mandate Movement. In her view, American evangelicalism views marriage as the most desired social institution, under which nothing can compare. Most of her examples come from her experience as a student and professor at small Christian colleges, which have a notorious tendency to inflate issues of marriage. Hitchcock then turns to three figures from churc…
Post a Comment
Read more